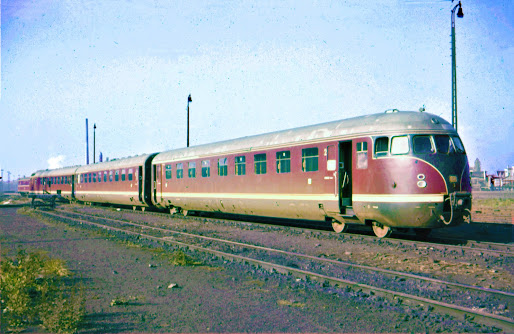 These dated from 1952 and had a B'2'+2'2'+2'2' axle arrangement with three car sets, later there were four car sets. In total there were 20 powered end cars, 22 middle cars and 13 unpowered control cars. Engines were either 1 x 735 kW or 2 x 735 kW for a three or four car set.
The railcars were concentrated in Hamburg-Altona and Braunschweig; from 1982 only Braunschweig was used as a depot. The last of the 20 railcars originally built were retired by 1985. The last surviving VT 08 5 became known as the "World Champion Train" from the movie The Miracle of Bern.

"Starting in 1952, the new class VT 08.5 diesel powered rail cars came into use on the long-distance express network for the new German Federal Railways. These three or four-part units impressed people right away with their elegant streamlined shape ("Eierköpfe" / "Eggheads") and they had a galley, dining area, a writing compartment, and a mail compartment. Starting in 1953, these comfortable trains with their beautiful shape ran on all the important long-distance lines, whereby they accumulated up to 1,500 km / 937 miles daily. Even on the new TEE network introduced in 1957 they had a chance to prove themselves right from the start because the class VT 11.5 powered rail car trains planned for this service were just beginning to be delivered."