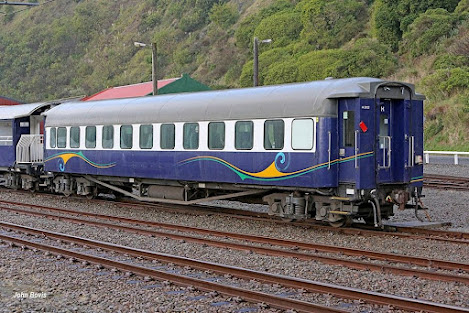 "Between 1937 and 1945 157 of the “standard” 56 ft cars were built at Addington and Otahuhu workshops. Several different formats were built including First Class Cars (several variations), 108 Second Class, Day/Sleeper composites, 1st/2nd composites, 14 & 16 berth Sleepers, Ambulance Cars and one Vice Regal Car. They became the standard main line passenger vehicle for many decades. The final examples were not disposed of by KiwiRail until 2018. In later years most were extensively rebuilt to form the named trains of the seventies and eighties.

"A1975 was in a batch of six cars that had a six seat compartment that could be reserved for private on family parties. These particular cars were not fitted with the pressure ventilation system used in other 56 ft first class cars. It was the last of the iconic 56 ft cars built."