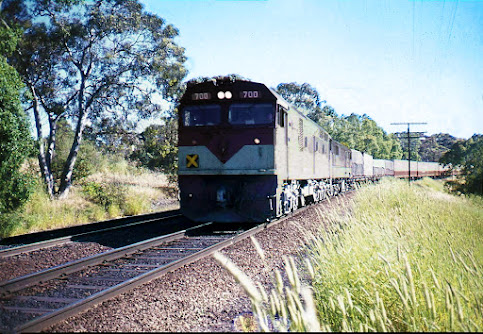 The six of the class were built in 1971–1972 based on the Alco DL500g model, built by AE Goodwin, Auburn, New South Wales for the South Australian Railways. They were identical to the New South Wales 442 class locomotive.
"The first three were delivered on 1600 mm (5 ft 3 in) broad-gauge bogies and the latter three on 1435 mm (4 ft 8 1⁄2 in) standard-gauge bogies. In March 1978, they were included in the transfer of the South Australian Railways to Australian National. The locomotives frequently switched gauges before all were put on the broad gauge in 1987. Following the Adelaide-Melbourne railway line being converted to standard gauge in 1995, all of the 700 class were converted to standard gauge. The 700 class operated on all main lines in South Australia and interstate to Broken Hill and Melbourne."
The prime mover was a turbocharged 4-stroke Alco 251C V12 rated at 2,000 hp (1500 kW).
More
at 8:13 PM