Boeing recommends grounding more than 120 of its 777 jets worldwide following a catastrophic engine failure on a United Airlines plane in Denver, CO 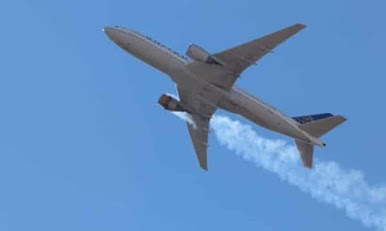 Flight 328 was flying from Denver International Airport to Honolulu with 231 passengers and 10 crew on board on Saturday when one engine failed shortly after take-off. Police in Broomfield, Colorado posted photos of pieces of debris from the plane near houses and other buildings. There were no reports of any injuries on the ground or among the passengers.

United Airlines said it was temporarily grounding all 24 of its Boeing 777s on active duty, and Japan’s aviation regulator swiftly followed suit, ordering Japan Airlines (JAL) and All Nippon Airways (ANA) to cease flying 777s that use the Pratt & Whitney PW4000 engines while it considered whether to take additional measures. Japan said ANA operated 19 of that kind and JAL operated 13.

The planes are also used by carriers in South Korea. A spokeswoman for South Korea’s transport ministry, speaking before Boeing’s statement, said it was monitoring the situation but had not yet taken any action. Korean Air Lines said it had 12 of the planes, half of them stored, and it would consult with the manufacturer and regulators and stop flying them to Japan for now.