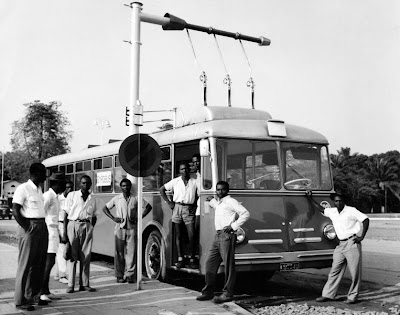 The Transports en Commun de Leopoldville (TCL) was established in 1923 to provide electric power to the city and later the distribution of electricity from the Sanga and Zongo dams in Bas-Congo.  The state held 54% of the shares and transport companies OTRACO and Cominiere’s Vicicongo railway were involved, but the choice of the electricity company was explained by the proposed transport solution – electric buses.  TCL ordered 12 'gyrobuses' from the Swiss Oerlikon company, a new technology that had only been introduced in the Swiss town of Yverdon in 1953.  Electric power was generated from a fly-wheel mechanism en route, but required recharging every 5 km from an overhead 3-phase pole. When the 20 km gyrobus network was inaugurated by Colonial Minister Buisseret in July 1955, it was the largest in the world.

TCL also acquired 37 diesel buses, of which 27 were equipped with articulated trailers and by 1956 carried 10 million passengers. The gyrobuses proved challenging to operate. Recharging took several minutes and drivers tended to deviate from established routes on rough roads, increasing wear and tear. The gyrobuses were phased out in 1959. At independence from Belgium in 1960, TCL operated 200 buses (mostly Belgian-made Van Hool models) and carried 100 million passengers on 18 lines.  (from kosubaawate.blogspot.com)
at 10:53 PM