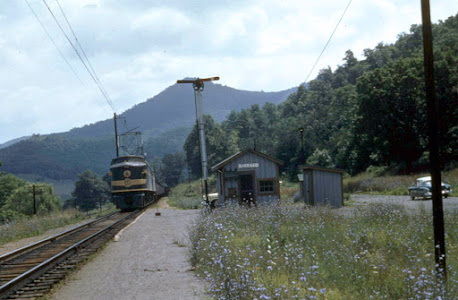 Virginian Railway locomotive 128 hauls a coal train at Ellett in 1956. This was one of 4 built by General Electric in 1948, a (Bo′Bo′)(Bo′Bo′)+(Bo′Bo′)(Bo′Bo′) type with a power output of 6,800 hp and used on the 133-mile (214 km) electrified portion of the railroad, from Roanoke, Virginia to Mullens, West Virginia.
They were the largest two-unit electric locomotives used in North America and were powered by 11 kV, 25 Hz AC from overhead. They were retired and sold for scrap shortly after the 1959 merger of the Virginian with the Norfolk and Western Railway. None of the 4 examples were preserved.
More
at 10:52 PM