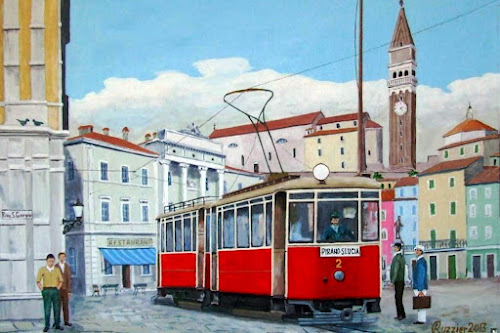 Usually the sequence in cities was for electric trams to be introduced first, followed by their replacement with trolleybuses, and then diesel buses (and that was Wellington NZ's experience).  But in Piran/Pirano trolley buses appeared first in 1909 replaced by the tram in 1912.

"The line was five and a half kilometres in length, and ran from Tartini Square in Piran to the train station in Lucija. Trams carried passengers along the Slovenian coast for about 40 years, until August 1953, when the rails and electric wiring were scrapped and the trams themselves were sent to Bosnia, where they were included into the regular tram service in the city of Sarajevo."