traffic at the intersection of Lambton Quay and Bowen Street, Wellington, 1953 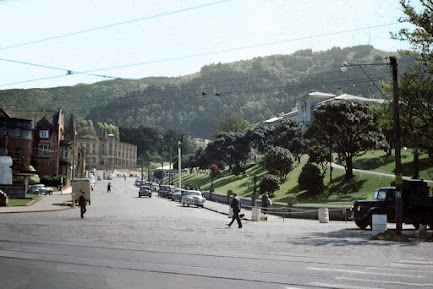 For Wellingtonians the most obvious change in the past nearly 70 years is the blocking off and pedestrianising of the area between the Cenotaph at far left and the Parliament grounds wall in the late 1960s so that the tram tracks route down Bowen Street before reaching it and turning became the only one for all traffic.  Trams up Bowen Street to Karori had only one year left to run. Those along Lambton Quay in the foreground had 11 years left.  Before today's standard means of sectioning off areas of roadwork using cones ("witches hats"), white 44 gallon drums and ropes were used.

See lots more in the book Wellington: a Capital century by David McGill.