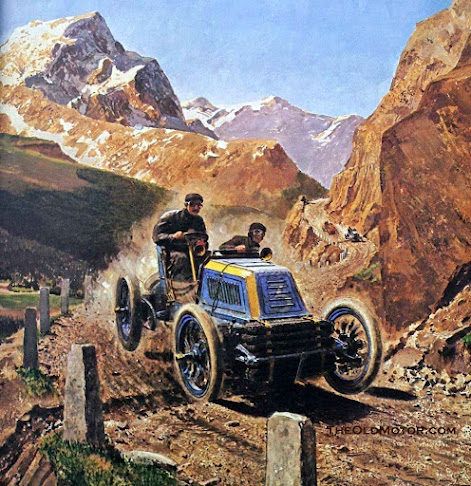 Road racing appears to have been born in France where the first important contests were run from Paris to other cities and were called Les Grandes Epreuves (The Big Trials).
The first one was from Paris to Berlin and was a grueling 687-mile dash. This race held during 1901 was won by Henri Fournier in his 60-h.p. Mors, a French car in which he was also victorious within the previous Paris-Bordeaux Race. This second event, the Paris to Vienna race held in 1902, was perhaps one the toughest of all early races and has become a legendary event because of this stage over the mountain pass.
This painting depicts Baron Pierre de Caters descending from the Arlberg Pass portion of the event, which started with a hard 6000-foot climb up a wagon road crossed by car-smashing drainage ditches. On the trip up and down the other side, racers had to avoid the vertical rock slabs which were used to keep out of control wagons from plunging over the steep sides. There were more than a dozen accidents on the descent caused by burned-out brakes, leaving the racers no other means of slowing down other than crashing into the inner wall of the pass.
De Caters later in the race ended up breaking a wheel in a shunt with Louis Renault, whose brother Marcel went on to win the event. De Caters and his Mors did manage to come in some four hours later after dealing with the wheel, finishing in the eighteen positions.
The car has survived and is in The Collier Collection in Florida. Other outstanding Helck art is featured on The Old Motor courtesy of the Helck family.
Source
at 9:34 PM