Getting around Wellington in the '50s and '60s 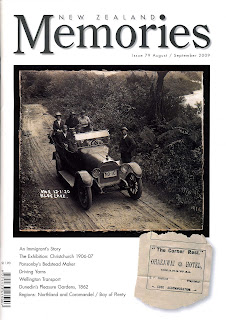 This is the title of an article in the August/September issue of New Zealand Memories magazine by Geoffrey Churchman on his personal experiences of travelling around the Wellington region by tram, bus and train in this period. The article is a follow-on to his new book Wellington Transport Memories which features details on how Wellingtonians generally travelled around their region by various methods from the late 19th century to the early 1980s. The article contains photos for which there was no room in the book, and still more photos that had to be omitted from the book are on the transpress webpage for it.

New Zealand Memories is published six times a year and is a must for anyone interested in New Zealand history.
at 4:29 PM