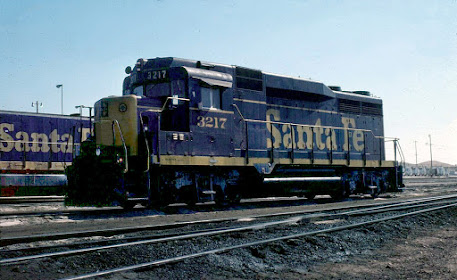 The designation of a rebuilt GP30, this one in June 1981. The original GP30 was delivered from EMD in May 1962. "[Santa Fe] performed a similar upgrade in its own Cleburne, Texas shops, stripping the locomotives down to bare metal and rebuilding with new equipment. The 567D3 engines were upgraded to a 2500-horsepower rating by the use of 645-series power assemblies. The generators and traction motors were upgraded and control and electrical equipment was replaced. The trucks received Hyatt roller bearings and single-clasp brake systems. Rooftop air conditioners and new horns were added. The locomotives were repainted in the blue and yellow Yellowbonnet scheme, and designated GP30u (for upgraded). 78 of these survived until the BNSF merger, and were eventually all sold off." (Wikipedia)