the SBB in Italy 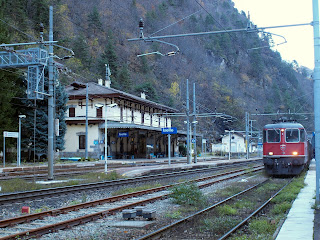 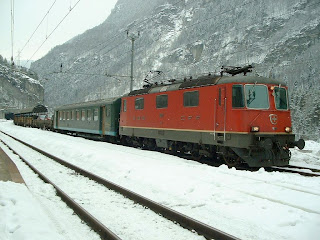 The famous 20 km long Simplon tunnel, the first bore of which was opened in 1906 and the second in 1921, runs from Brig in Switzerland into Italy; the border is about half way inside the tunnel.  The electric catenary is maintained by the Swiss Federal Railways as far as Domodossola, some 30 km into Italy.  Swiss Railways operate on 15 kV AC, Italian railways on 3 kV DC.

The first station inside Italy is Iselle di Trasquera, then follows a 360 degree spiral tunnel before the next station at Varzo.  As this suggests, the terrain around this area is mountainous, making for some scenic photos.