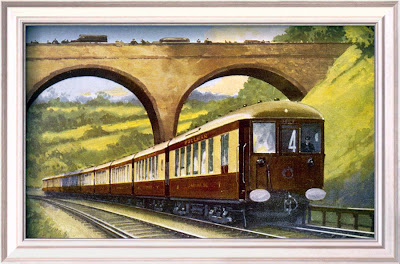 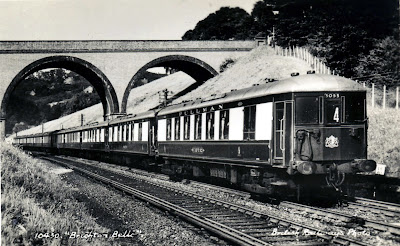 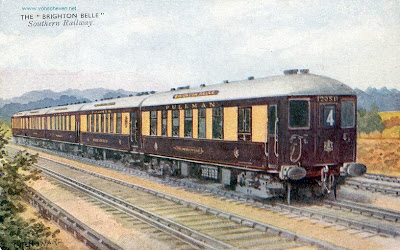 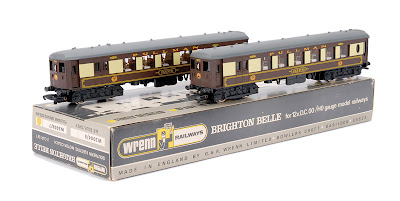 Another print we have on our office wall is the publicity poster above of the Brighton Belle, a 5-car all-Pullman electric multiple unit, in fact the world's first electric all-Pullman set, which ran on the Southern Railway from Victoria Station in London to Brighton from 29 June 1934 until its withdrawal on 30 April 1972.

The poster was based on the photo below it taken south of Quarry Tunnel.  Obviously some artistic license was involved in regard to the height of the road viaduct!  The train ran non-stop and took 60 minutes for the 82 km (51 mile) journey. This YouTube page has the well-known film of the train journey from the cab speeded up so that it takes only 4 minutes.

The umber and creme Pullman livery was that of the Southern Railway; photos taken in British Rail days have it in the blue/grey BR livery, in which the train was repainted in probably the mid-1950s.  Details of where the cars are now are on this webpage.

This year a mural commemorating the Brighton Belle was painted into the arches underneath Brighton Station, along the north side of Trafalgar Street, running along the length of the Brighton Toy and Model Museum.
at 7:55 AM