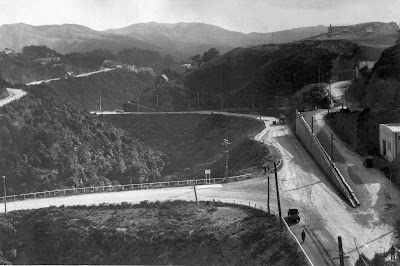 One of the photos that was considered for but not used in our book Wellington Transport Memories from last year (we used a photo taken on the other side instead), this shows the site of what would later become Appleton Park. A pickup truck is parked where Birdwood Street turns off to the left, while a car is on the new formation leading to the Northland Tunnel, still in the process of construction, although the tram tracks are in place. A double saloon type tram makes its way towards the city in the distance. The widened space in the roadway is one of the places where spoil from the tunnel boring was dumped.
at 9:27 AM