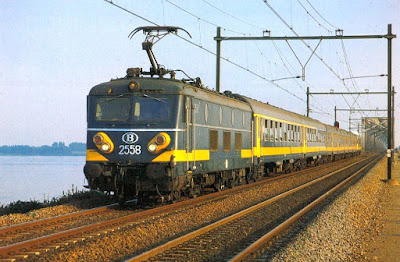 "Class 25 was intended as a passenger engine. The main differences to Class 23 were the cables on the roof and the provision of wheelslip detection plus an improved starting system. The Class 25 roof cabling was later applied to all Class 22 and 23 locos as they passed through the works. They were painted dark blue with a yellow band low on the body. Unlike the other 1950's locomotives, Class 25.5's nose and side numbers plus their SNCB logos were in chrome rather than being painted on.

"The Class 25.5 was the first class on SNCB to be modified for push-pull operations followed by Class 25. In 1973 the last eight locomotives of Class 25, 2515-2522, received the dual voltage equipment from locomotives 2239-2250 and a third headlamp. They also had Dutch signalling and train protection fitted. Lastly, they were given push-pull equipment. This let them work into Holland hauling push-pull trains operating the Benelux intercity service between Brussels and Amsterdam. This sub-series was renumbered in order 2551-2558 and named Class 25.5."