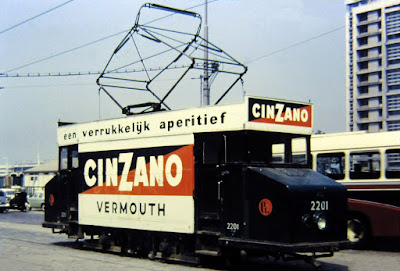 One of two 2-axle cars obtained from the German firm of Schörling in Hannover; ordered in 1928 and delivered in 1930.  As can be seen they were used also as mobile billboards.

The operation was vacuum cleaner style. The two noses were water tanks and water was sprayed onto the rails. Two chisels chopped debris from the rail grooves which was sucked through two nozzles with a powerful suction.