from The Washington Times 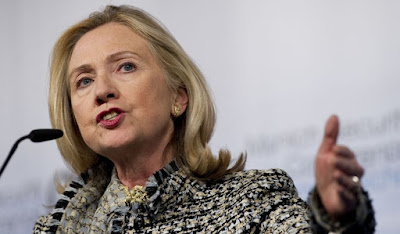 The State Department initially approved a weapons shipment from a California company to Libyans seeking to oust Moammar Gadhafi in 2011 even though a United Nations arms ban was in place, according to memos recovered from the burned-out compound in Benghazi.

The documents, obtained by The Washington Times, show U.S. diplomats at the Benghazi compound were keeping track of several potential U.S.-sanctioned shipments to allies, one or more of which were destined for the Transitional National Council, the Libyan movement that was seeking to oust Gadhafi and form a new government.

At least one of those shipments, kept in a file marked “arms deal,” was supposed to come from Dolarian Capital Inc. of Fresno, California, according to an end use certificate from the State Department’s office of defense trade controls licensing that was contained in the file.

The shipment was to include rocket launchers, grenade launchers, 7,000 machine guns and 8 million rounds of ammunition, much of it new and inexpensive hardware originally produced in the former Soviet bloc of Eastern Europe, according to an itemized list included in the end use certificate.

Dolarian Capital, part of a small network of U.S. arms merchants that has worked with U.S. intelligence, confirmed one of its licensing requests to ship weapons via Kuwait to Libya was approved by the State Department in spring 2011 and then inexplicably revoked before the armaments were sent.