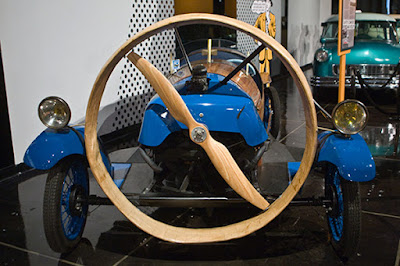 Is it a car, is it a plane?  There have been experiments with both at once, but in this case it's a car.

This is another entry on the 15 agonizing automotive atrocities webpage

'As passengers on aircraft taxiing to the runway, we’ve often wondered what a plane would be like if it spent all its time on the ground. The makers of the Helicron concept obviously had similar ideas, but unfortunately brought them to reality. The French car uses a propeller to move it slowly down the road and up hills. According to Old Cars Weekly, top speed is “a gusty 60 miles per hour.”'
at 9:54 AM