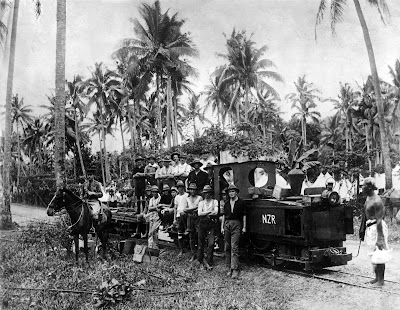 At the outbreak of WW1, Western Samoa was a German colony and needless to say, loyal troops of the British empire, here of New Zealand, promptly went there to change that.

This was a narrow gauge railway of about 8 miles (13 km) running from the jetty at Apia to the wireless station for which the rolling stock comprised a Telefunken-built petrol (gasoline) powered engine and some wagons. The troops constructed a second engine using a motor for a launch.

This is one of the illustrations in a 64 page book published by KiwiRail for the Ministry of Culture and Heritage on NZ railwaymen overseas during WW1, New Zealand Railwaymen at War 1914-1918.  There is also coverage of memorials, such as the flagpole at Petone and AB 608 Passchendaele. Being composed by academics the focus is on servicemen and military campaign matters, rather than railway equipment and technology, but there are enough details including pictures to interest railway enthusiasts: 64 pages in A4 format, softcover with flaps. Published price $NZ 25 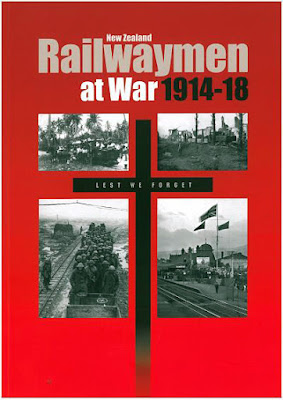