In the U.S. right now the Democrats (and the media) regularly set traps for Donald Trump, which he regularly falls into. The art of diplomacy is when you're trying to maintain good relations with two sides who don't like each other in not saying things that upset one side, or at least not too much. This was the situation the U.S. found itself in during the Falkland Islands war in 1982 after Argentina enforced its claim to them by occupying them and Britain went to get them back by military action.

Relations between Israel and Palestinians are always thorny; most of the Arab world and its news channels like Al Jazeera sides with the Palestinians so Egypt has to be careful in what it says publicly. 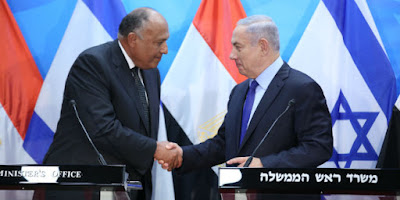 Egyptian Foreign Minister Sameh Shoukry caused an angry stir in the Arab world on Sunday when he said that Israel’s actions do not constitute terrorism against Palestinians.

The comment, made at a Q&A session with students at the Egyptian Foreign Ministry, was in response to a question about why the Egyptian government does not condemn Israeli and American actions in the Middle East as acts of terrorism, reported Ynet.

“We can look at this issue and define it as a ‘rule by force,'” replied Shoukry. “However, there is nothing to suggest that there is any connection between Israel and terrorist organizations. There is nothing that leads to this conclusion.”

He continued on to defend Israel’s protective measures, suggesting that from some perspectives, Israel’s strength in terms of security is a result of “dealing with a lot of challenges” which have threatened that security ever since the state was established in 1948.