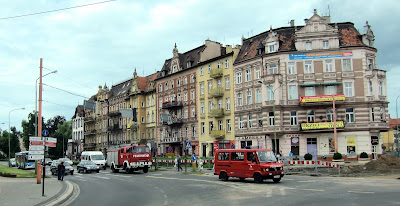 A Mercedes van and a Magrius Deutz fire truck seen in Legnica (Liegnitz).  Feuerwehr is actually German for fire brigade, so these may have been bought second hand from Germany. A row of pre-war German buildings can be seen in the background.  This was another city which survived the war with little damage, but civic vandalism of both the old town and the city park by its Polish council in the 1960s has significantly reduced its visitor appeal today.  (Geoff Churchman)
at 5:25 AM