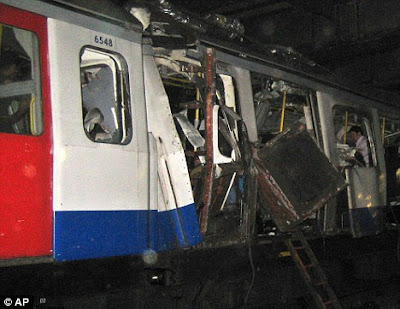 On 7 July 2005 Islamists decided it was time to give London a demonstration of what Islam stands for, and blew up three Tube trains and a double-decker bus during the morning rush. Two weeks later they decided to repeat the dose, but fortunately on that occasion their bomb-maker's skills were deficient and only one person was injured.

To reinforce the message that these people are just as nutty and dangerous as they were then, just today it was announced that yet more Muslim terrorist plotters have been arrested.

Our thoughts go to the families of those killed by the 7/7 Muslim terrorists and the many more who were maimed, both physically and psychologically by them. We hope too, that British security forces manage to prevent Muslim terrorist acts during the forthcoming Olympic Games.
at 6:28 AM