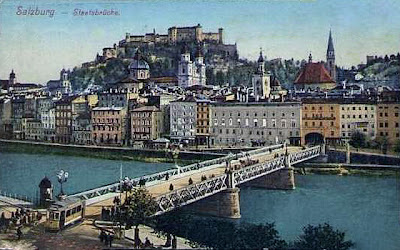 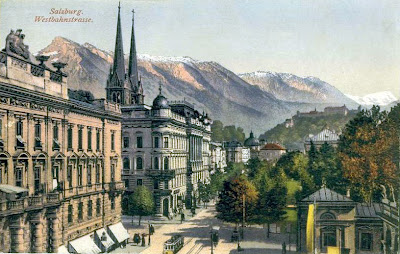 We mentioned in the previous post that Salzburg has had trolleybuses since 1940.  That was the year that the previous trams were replaced in three stages.  The electric tram system (standard gauge) took over in 1909 from the horse trams and used the relatively high voltage of 1000 V DC.  Because the cars were painted yellow instead of the red of the city's Lokalbahn railcars, people spoke of "the Electric Yellow" and even the Rasenden Eierspeis (racing scrambled eggs).  The system was only 3.6 km.

The electrical equipment of all power cars came from Siemens. Five trailers (101 to 105, built 1920) came from Simmering. An overhead maintenance tram, not numbered, completed the list.  Maximum speed on the system was 20 km/h (12 mph)
at 5:38 AM