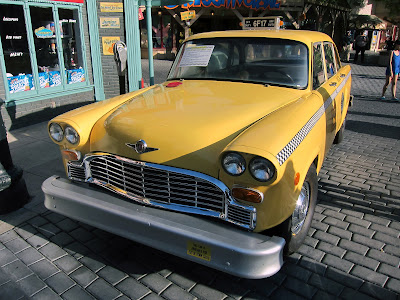 Now long gone from NYC, but for decades an icon of the city, the Checker Taxi Cab was produced by the Checker Motors Corporation of Kalamazoo, Michigan.  The 'Checker', particularly the 1956 to 1982 A8/Marathon, was comparable to the London Taxi in its nationally recognised styling, which went unchanged throughout its use, and movies such as Martin Scorsese's 1976 film Taxi Driver, spread this internationally.
at 4:53 AM