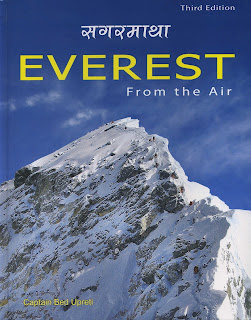 As everyone knows, on 29 May 1953 New Zealander Edmund Hillary and sherpa Tenzing Norgay became the first people to reach the summit of Mt Everest. Three years later, 4 Swiss repeated the achievement. Since then about 4,000 people have done the same, but it is still a small club, and still a dangerous and very difficult expedition.

For armchair travellers this all-colour book printed and published in Nepal, and available in English, French and Japanese editions, gives a sense of the thrill of scaling the world's highest mountain from the base upwards. As the title indicates, it also contains a lot of photos which you need to get onboard a sightseeing flight to take.

The text contains a history of the mountain, and what is and has been involved with climbing it. It describes the region generally and also contains a brief summary of the yeti legend, basically something which no evidence supports, but the name has been adopted by Kathmandu based Yeti Airlines, which serves 8 destinations with 7 small aircraft. The book has 112 pages, hardcover
at 3:16 PM