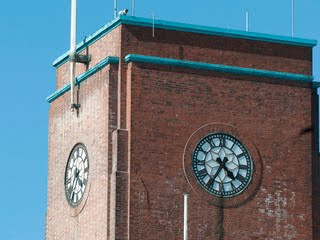 The former Christchurch railway station clock in the tower of the building has been stuck at 4.36 since the morning of 4 September as a constant reminder of the exact time the city was rocked by a magnitude 7.1 earthquake - until today when mayor Bob Parker started it again.

The clock tower overlooks the city centre from Moorhouse Avenue, one of Christchurch's busiest streets. The building, opened in 1960 as the Christchurch Railway Station, is registered with the New Zealand Historic Places Trust. It is now used as an entertainment complex, owned by the New Zealand Science and Technology Charitable Trust.

The tower remains braced while repairs from the earthquake damage continue.

The inner entrance area of the building had a large map in ceramic tiles on the floor of the South Island railway system as it was in 1960. By the time the station closed and a new passenger station opened at Addington in 1993, the network had shrunk considerably. The Ohai branch is the most recent railway line closure in the South Island.
at 7:25 PM