a case of life imitating art? 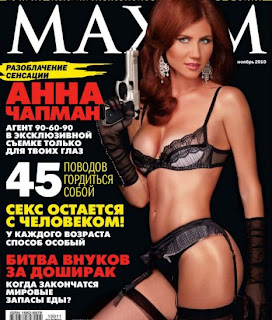 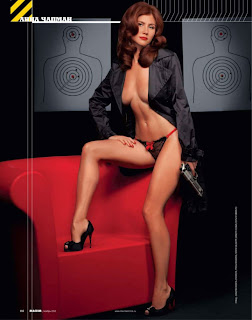 The spy who comes into your cold and warms you up? Russian "spy" Anna Chapman has posed in the Russian version of Maxim magazine (cover shown) in the most provocative photographs yet to appear of the secret agent who was deported from the United States in July.

Nine other spies were deported from the United States with her. The Kremlin has seized on the Cold War aspects of the case to try to boost the prestige of its intelligence services and avert what has widely been seen as a major disgrace for Russia's Foreign Intelligence Service (SVR), a successor to the KGB. Although celebrated by the Kremlin and Russian media, the Russian spy ring was reported to have failed to secure any major intelligence before their arrests in the United States. What exactly were they hoping for?

Russian President Dmitry Medvedev awarded the group of spies the country's highest state honors on Monday and Maxim has included Chapman in its list of Russia's 100 sexiest women.

The 10 Russians, accused of being sleeper agents (evidently in more ways than one), were swapped with four imprisoned Russians who were accused of having traded secrets with the West. What secrets were they?
at 9:50 AM