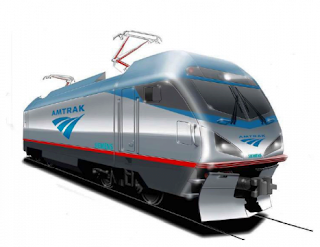 The future Amtrak family City Sprinter ACS 64 will serve the northeast railway corridor from Boston to Washington at speeds up to 201 km/h and from Philadelphia to Harrisburg with 177 km/h. The locomotives will replace old locomotives with average mileage of nearly 6 million km (3.6 million miles) travelled.

The new City Sprinters are a part of the extensive fleet renewal program Amtrak is launching for the next 14 years, with a special focus on passenger rail service in the Northeast.

These locomotives will be manufactured predominantly at the Siemens plant in Sacramento, California. Last year, this was vastly expanded with a $US 26 million investment. Siemens is currently at the forefront of the American light rail market by providing one of every three light rail vehicles to the market today.

According to UNIFE (Union des Industries Ferroviaires Européennes or Union of European Railway Industries), the world’s largest network of long-distance railroad lines exists in North America. The locomotive market there is currently regarded as the second biggest after Asia and, in the past, represented an average order volume of €1.5 billion per year. Amtrak is the largest passenger rail operator on the North American continent and also operator of the only high speed line.
at 2:40 AM