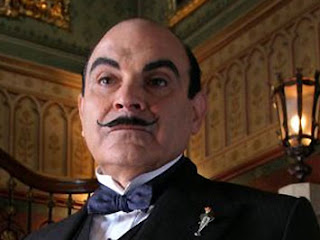 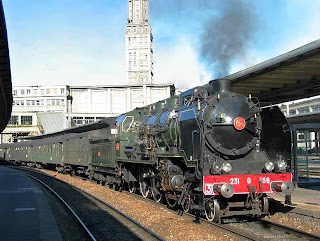 One of our favourite DVD collections is the Hercule Poirot series starring David Suchet as Agatha Christie's fictional Belgian detective. The movies' set designs and cinematography are superb presentations of both the art deco era and the Golden Age of Travel in the 1930s.

Last night we watched the episode Murder on the Links which also features locomotive 231 G 558, one of a series of 4-6-2 steam locomotives of the Chemin de Fer de l'État, operating on La Manche (English Channel) coast.

Supposedly set in 1936, however, it was a pity that the Chef de Gare of Deauville station was shown wearing an SNCF cap, as the SNCF wasn't created until the beginning of 1938. Also the beginning of the episode shows a man supposedly dubbing naration onto a newsreel 10 years earlier in 1926. Sound in movies didn't occur until near the end of the 1920s.

From time to time we will post more details of railway themed movies.
at 2:13 PM