US balance of payments statistics 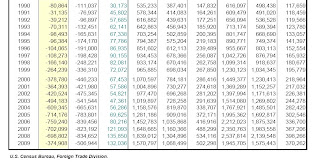 From 1990 to 2006 the deficit steadily increased; in the early 2000s this was due to the high US dollar value and ever more local manufacturing being shifted to Asia. With the drop in the US dollar more recently, export values increased.

But the most telling figure is the huge drop in imports in the latest 2009 year - this is a big indication of recession (as if you needed to be told)!
at 10:18 AM