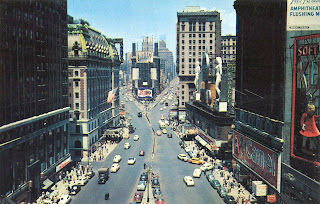 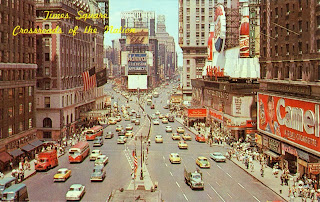 Two postcard views of Times Square, the first from the early 1950s, the second probably 1957.  The cinema is advertising the remake of The Ten Commandments which was released in the USA on 5 October 1956, however, the attire of the pedestrians looks rather summery and this movie could have had a long run; in addition there are at least five 1957 cars in view.

Between the two pictures the traffic direction on 7th Avenue has obviously been reversed.  Now both it and Broadway have traffic in the opposite direction.
at 8:50 PM