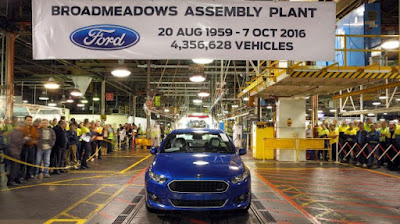 We should have included this with our Australia Day posts yesterday.

This is the last Ford built in Australia.

The blue oval released photos and information of the final Falcon rolling off the production line on 7 October 2016.

The blue Falcon XR6 was the last of 4,356,628 vehicles manufactured by Ford since it began local manufacturing in a rented wool stores in Geelong in 1925.

It is believed the final 10 cars were built that day at the Broadmeadows plant. Ford Australia CEO Graeme Whickman hosted a private ceremony with the 600 workers still employed in the manufacturing side of the business.

"Today is an emotional day for all of us at Ford," said Whickman. "We are saying goodbye to some of our proud and committed manufacturing employees and marking an end to 91 years of manufacturing in Australia.

Quite sad, maybe Trump can revitalize the plant -or have some push for the Aussies as he seems to be doing on home turf.

The operation is kaput, it was being subsidized by the Australian government and the US parent company. For Trump, it's American workers first, not those employed by US companies in other countries.