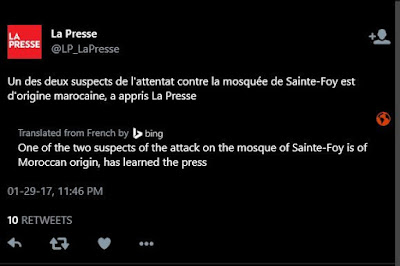 A jihad attack on a mosque? Yes, it seems Saudi-inspired Muslims don't like moderate Islam any more than other religions.  Maybe moderate Muslims should support Trump's measures instead of complaining about them.

Sources report the Quebec mosque shooting suspects are Bashir Al-Taweed and Hassan Matti who shouted 'Allahu Akbar' before opening fire [what else?]