Donald Trump is to sign orders restricting refugee access and immigration to the U.S. from Muslim countries 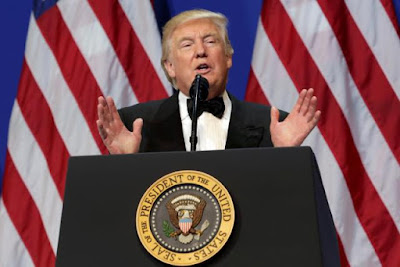 U.S. President Donald Trump is expected to sign several executive orders on Wednesday restricting immigration from Syria and six other Middle Eastern or African countries, according to several congressional aides and immigration experts briefed on the matter.

In addition to Syria, Trump’s orders are expected to temporarily restrict access to the United States for most refugees. Another order will block visas from being issued to Iraq, Iran, Libya, Somalia, Sudan and Yemen, said the aides and experts, who asked not to be identified.

Trump’s restrictions on refugees are likely to include a multi-month ban on admissions from all countries until the State Department and the Department of Homeland Security can increase the intensity of the vetting process.

The Republican president was expected to sign the orders at the Washington headquarters of the Department of Homeland Security, whose responsibilities include immigration and border security.

We think Saudi Arabians should be included in this list.  The extremist Wahhabism is the official, exclusive doctrine in that country and is cited by ISIS (among others) as their inspiration and can be witnessed in their practices.  Everyone knows that 15 of the 19 terrorists of 9/11 were indoctrinated by the Saudi regime.
at 3:29 PM