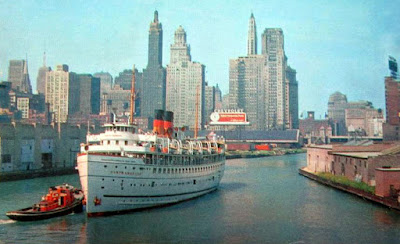 This was a Great Lakes steamship built by the Great Lakes Engineering Works at Ecorse, Michigan, in 1913 for the Chicago, Duluth & Georgian Bay Transit Company. The vessel was launched on 16 January 1913 and was the older of two sister ships, the newer one being SS South American.

North American was 280 feet (85 metres) in length, had a 47-foot (14 metres) beam, and drew 17 feet 6 inches (5.33 metres). She had a 2,200 indicated horsepower quadruple expansion steam engine and three coal-burning Scotch boilers. In 1923 the boilers were converted to burn oil.

In 1963, North American was sold to the Canadian Holiday Company of Erie, Pennsylvania. The company used her in cross-lake service between Erie and Port Dover, Ontario, Canada, for one year until she was retired in 1964. After being retired from service, North American was involved in purchasing deals of uncertain nature, and was finally sold at public auction to the Seafarers International Union of North America in 1967 for use as a training ship at Piney Point, Maryland.

While North American was in the North Atlantic Ocean under tow to Piney Point, she unexpectedly sank off Massachusetts on September 4, 1967, 25 nautical miles (29 miles; 46 km) northeast of Nantucket Light.