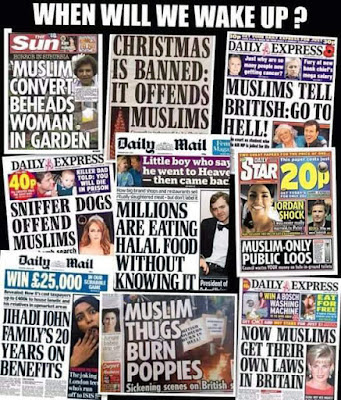 Article below.  There are some aspects which the media have omitted; one is that the seven countries were not specified under Trump's executive order: they were already targeted under the Obama administration and if anyone from a Visa Waiver Country (including NZ) visited them, then they would be rejected under ESTA and would need to apply for a Visa in the normal manner.  Another is that in the four years 2011-2015 under the Obama administration only 1,883 Muslim refugees were admitted to the US.  This number was substantially increased last year, however.

The actual number of Muslim terrorists -- in the sense of those willing to carry out attacks either in the country they are in or in another -- living in Western countries isn't great; even in Merkel's Germany it's unlikely there are more than about 20,000 of them.

What there are huge numbers of, however, are Muslims who agree with and support the terrorists in one or more ways.

There are also huge numbers of Muslims who have attitudes that are simply incompatible with Western values, who believe that their religion entitles them to commit crimes against kuffar, particularly sexual offenses against women and children, who aren't interested in working for a living but in exploiting and defrauding welfare, or living from the proceeds of crime, drug dealing in particular.

These are the ones who must be refused entry.

The Canadian Prime Minister has said his country will accept refugees rejected by the USA as a result of President Trump’s ban.

Justin Trudeau, 45, announced the move in a Twitter message last night that read: “To those fleeing persecution, terror & war, Canadians will welcome you, regardless of your faith. Diversity is our strength #WelcomeToCanada”.