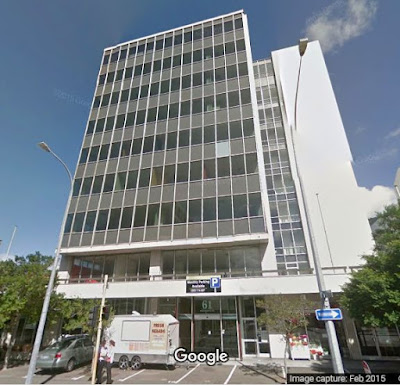 At the time it was built in 1964, the 10-storey 37 metre high building was one of the Capital's early high rises, although it is of relatively modest height now.

The TV News this evening reported that a column inside is warped and the staircase structure on the west side is detached from the main building.  It has now been decided this unoccupied building (except for some Asian tenants who shouldn't have been living in it)) will be demolished.

Also structurally damaged is the relatively recent Statistics NZ building on Waterloo Quay and the BNZ's Centerport building (well, who cares about the awful binz?).
at 8:52 PM