'La Marseillaise' of the Messageries Maritimes, 1949 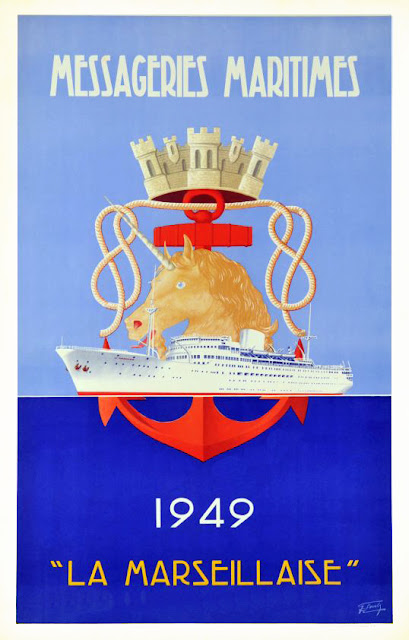 "The La Marseillaise was symbolic of MM’s recovery after WW2 and was the company’s new flagship. Her maiden voyage on August 18, 1949 was indeed somewhat of a success. Completed in July 1949, her first maiden voyage was Marseilles to Yokohama and she could carry just 341 First Class, 75 Tourist Class and 371 “rationnaires” (troops). This was preceded by two Mediterranean cruises.

"Although in service for only 6 years after 11 years under construction, La Marseillaise rivalled the Normandie and Pasteur as magnificent exemplars of the French paqueboat at its zenith. She was the largest liner yet built for MM and the fastest due to her triple-screw Sulzer diesels and a very fine hull form. Unlike her unorthodox square funnelled predecessors, she was truly yachtlike with an all-white livery and a heavily flaired bow with her Normandie like “turtleback” over the mooring deck."