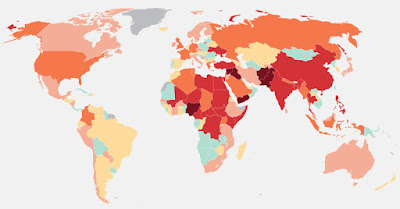 Available as a pdf file here

Surprisingly, the total number of deaths from 'allahu akbar' attacks declined 10% in 2015 from 2014, although that total is still several times what it was a decade earlier, and the negative news outweighs that.

"While the weakening of ISIL and Boko Haram in their central areas of operations in Iraq and Nigeria is positive, this change has coincided with two key negative trends which have driven up terrorism in the rest of the world. The first is ISIL’s shift in tactics to transnational terrorism, not just to other parts of the
Middle East but to Europe as well. The second key negative trend is Boko Haram’s extension into neighbouring West African countries which has led to Cameroon and Niger rising to 13th and 16th in the GTI.


"Accompanied with these two key negative trends was an increase in the number of ISIL-affiliated groups that undertook attacks. The research found that the number of countries with greater than 25 deaths rose to 34, an increase of seven to the highest numbers ever recorded. At least six countries saw very significant deteriorations in their GTI scores in 2015 leading to large rank changes from the previous year. This accounted for the overall deterioration in the global GTI score of six per cent as these falls outweighed the substantial gains in Nigeria and Iraq. These countries include; France, Turkey, Saudi Arabia, Kuwait, Tunisia and Burundi."

Saudi Arabia's promotion and funding of Islamic extremism is turning around to bite them again; but they are a long way from being the worst sufferers from it.
at 11:16 AM