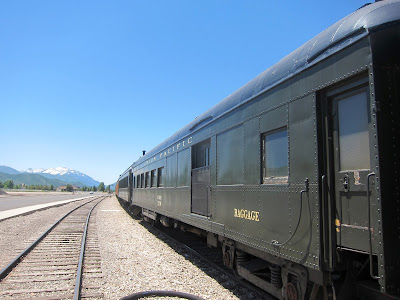 Located in Heber City, this operation today comprises 16 miles (26 km) of the 28 mile (45 km) D & RGW branch to Heber from Provo.  The line was abandoned by Rio Grande in 1967 and was saved for tourist purposes in 1970.  For reasons that haven't been satisfactorily explained, however, the first 12 miles (20 km) to Vivian Park from Provo were later torn up and turned into a rail trail.  This includes some of the scenic Provo Canyon. We were told it was because of politicians.

It has two 1907 Baldwin 2-8-0-type steam locomotives: former Union Pacific No. 618 and ex-Great Western No. 75, although they are both out of service at present receiving major maintenance work, so train runs are operated by two vintage diesels, as above.