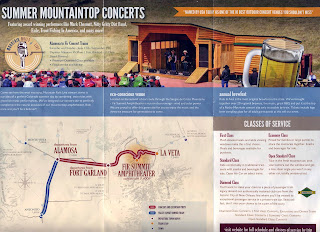 This runs west-east between Alamosa in the San Luis Valley and La Veta in the La Cuchara Valley over the La Veta Pass (9,500 ft/2900 metres elevation). Originally it was opened in 1878 as a 3 ft gauge line and was standard gauged in 1899.

Unlike the typical museum or preservation railway, this actually hauls freight over the former UP lines.  But the passenger excursions are a major part of it and trains are often used to take concert goers at the summit, a place called Fir, where there is an ampitheatre.