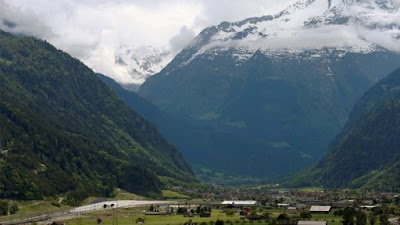 The world's longest and deepest rail tunnel has officially opened in Switzerland, after almost two decades of construction work.

The 57 km (35-mile) twin-bore Gotthard base tunnel will provide a high-speed rail link under the Swiss Alps between northern and southern Europe.

Goods currently carried on the route by a million trucks a year will go by train instead.

The tunnel has overtaken Japan's 53.9 km Seikan rail tunnel as the longest in the world and pushed the 50.5 km Channel Tunnel linking the UK and France into third place.

The Gotthardbahn has been arguably Europe's most scenic railway route -- presumably the existing line over the mountains will be retained for passenger services to the towns served by it.
at 2:08 AM

Brilliant news. Well done Switzerland, if that does not tell our present Govt the value of investment in rail then nothing will.