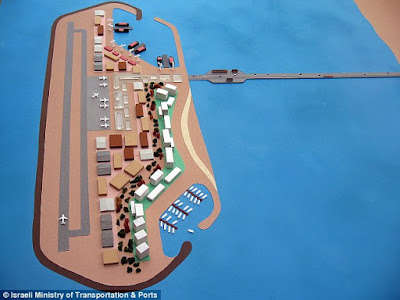 A $5 billion island could be constructed by Israel to connect Gaza with the rest of the world.

The Israeli government's security cabinet is debating the proposal which is backed by Prime Minister Benjamin Netanyahu.

The island would be linked to Gaza by a three mile bridge and could provide an airport and sea port.

You may wonder why Israel is willing to spend this kind of money on a pack of Islamists who have been launching rocket and suicide bomb attacks on Israel for a long time.  However, it could be part of Israel's ambition that Egypt annex the Gaza strip -- a facility like this would make that a more attractive proposition for Egypt.
at 4:30 PM