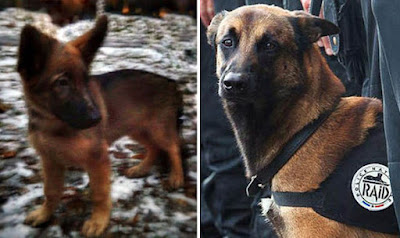 Now Alsatian puppy Dobrynya will replace Diesel as a gift and expression of Russia’s solidarity with France.

Russia's interior minister Vladimir Kolokoltsev wrote to his French counterpart Bernard Cazeneuve with his generous offer showing "a sign of solidarity with the people and police of France.”

Mr Kolokoltsev said the puppy ”will be able to occupy the place in service of the police dog Diesel killed during a special operation to neutralise terrorists."