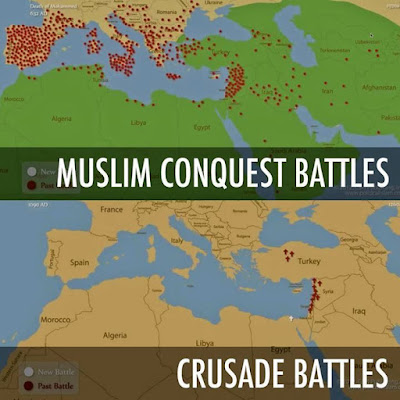 "In Europe over 580 Muslim slave raids, slaughters, looting, robbing and jihad attempts plagued the European countries and is the cause of the tragedies that continued into our current age in Eastern Europe.

"These relentless attacks destroyed the entire European Classical civilisation stretching for more than 1,000 years and forced Europe to rebuild itself.

"That was Islam’s contribution to Europe. [This is perhaps a little unfair; there is some interesting Moorish architecture in Spain]

"And how many 'brutal Christian crusades' were committed in defense against the constant stream of Muslim attacks and provocations? 17."

video by Bill Warner PhD on YouTube
at 10:13 AM