cars at the Gateway of India, Bombay, India, early 1960s 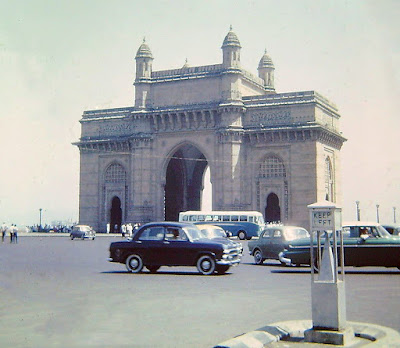 Or Mumbai as it is now called.  Some info:-

Gateway of India is a monument in Colaba in Mumbai overlooking the harbor at the end of Apollo Bunder. This triumphal arch in yellow basalt is an exaggerated colonial monument, conceived after the visit of King George V, in 1911. Today, the arch is a popular symbol of the city and one of the favorite local hangouts in the evenings and weekends. The stalls, the vendors of balloons, photographers and snake charmers give the area the air of a festive bazaar. The project is inspired by a monument in the style of the sixteenth century. The arch was officially opened in 1924, but became superfluous only 24 years later, when the last British regiment left India ceremoniously.
Gateway of India begun in 1911 and completed in 1924. From the opening of the Suez Canal to the advent of airliners was here that the English ships landed in India. And what better place to showcase the power of the British Empire with this impressive triumphal arch of basalt in style Indo-Saracenic.

I think the cars are all Indian-built, including the Hindustan (Morris Oxford), the Premier Padmini (Fiat 1100) and the circa 1955 Plymouth is probably also a Premier product.