the story of Driving Creek Railway 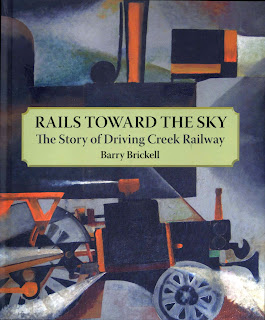 Barry Brickell in this new book recounts how he created a 15-inch (380 mm) gauge 2.7 km long winding, climbing industrial railway, with quirky innovative features, on his 24 hectare property in the scenic Coromandel: a fascinating engineering project originally built to transport clay for his pottery works, and which has since been turned into a major passenger carrying tourist attraction in the region.

The man himself is just as interesting as the railway, considering himself - with justification - to be both an artist and an engineer, although this isn't an autobiography as such.  The book has been published by David Ling, who seem to have entrusted the art direction to someone unfamiliar with the subject: the cover painting, although by Barry Brickell, isn't evocative of or relevant to the railway as internal combustion engines have been used exclusively (steam power has been considered but ruled out as most tourists come for the scenery and steam engines have the slight problem of depositing sparks - not good for a reforested conservation project.)  A better cover pic would have been like the one below. (By the way, if you are going to use an artwork with a title block obscuring a chunk of it, please re-include it inside without this excision).

And - an all too common gripe - some of the pages' ample "artistic" white space could have been used instead for bigger illustrations.  Most of the photos - predominately colour - are good, but some should have had the gamma corrected, or simply been retaken in better lighting conditions.  These faults aside, it is a worthwhile book; 227 pages, hard-covered, available for $NZ 50 in our shop. 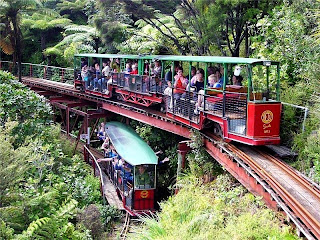