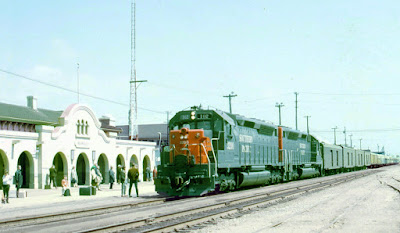 "SP bought 10 SDP45's in 1967 to replace aging PA and E units on their long distance passenger trains. On the demise of SP's long distance pass. trains, the SDP45's went into the Peninsular Commute Pool, replacing the venerable FM Train Masters. 5 were also leased to Amtrak for Coast Starlight service. The SDP45's also worked freight service on weekends as was normal for most Commute locos.

"When Caltran took over the Commute service, the SDP45's went into the freight pool. During the time of the ill-fated SPSF 1986 merger, three units received Kodachrome paint, and two units 3201 and 3207 kept their steam generators active for business car specials, the others had theirs deactivated, more or less creating two classes; freight and passenger SDP45's.

"As they never had the dual fuel/water tanks modified, they would have had short legs... Their last years were working local haulers around the LA basin."