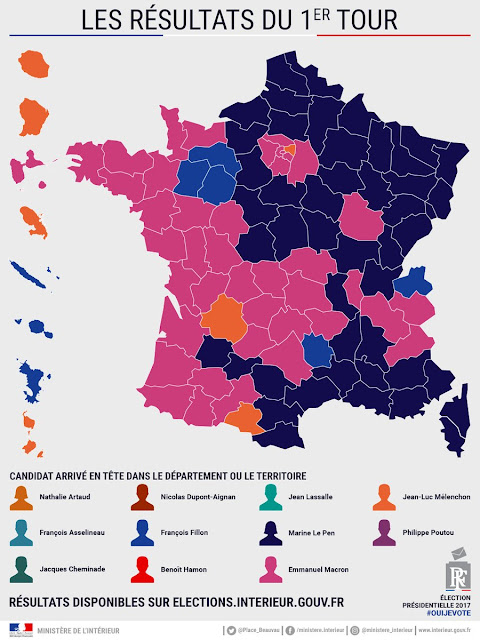 As predicted by the opinion polls, Emmanuel Macron and Marine le Pen were the two leaders of round one and on Sunday 7 May the choice for French voters will be for one of them.

The two have completely opposite views on most issues, but most notably on France's continuing membership of the EU; and the role of the EU generally.  In the past the highly nationalistic and isolationist stance of Le Pen would have not had the support of more than about a fifth of voters, but the problems caused by Muslim migrants in the last two years have hugely boosted the Front National's status and popularity, and the race between her and Macron is much closer than it would have been a few years ago, although nearly all pundits are predicting a Macron win.

The map above shows who won each département on Sunday.  The candidates for the two main parties, the Republicans and the Socialists, did not pick up many.  Unsurprisingly Le Pen's support is highest in the northeast and the south where the Muslims are the biggest problem.
at 6:04 PM