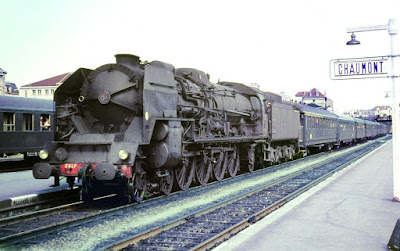 The 241.P 'Mountain' type was built for express passenger trains. A total 35 units were produced by Schneider et Cie of Le Creusot from 1948 to 1952 and used until 1973. This example was seen in 1967. Introduced as large scale electrification of the SNCF was already underway, they were the last new class of passenger steam locomotives in France.